Air Hawk Pro is the portable handheld air compressor that works on battery power. But can it really inflate a tire in minutes? That what I’m going to find out in this review of Air Hawk Pro. Air Hawk Pro cordless tire inflator has been advertising for a while but it just showed up in stores here in Las Vegas just this past week, in February 2017. I bought it at a local Target for about $60.

For my first test I’m just going to do some tire inflation and a basketball to see how it works overall. First thing the instructions say is to charge the battery for three hours before use, so I’m going to do that right now. And now we wait.

You’ve probably seen the advertising for Air Hawk Pro automatic cordless tire inflator. It shows it as an air compressor that works efficiently in filling up tires quickly. All you do is turn it on, select the air pressure that you desire, press the button, and it inflates until it reaches that air pressure and then it shuts off. That’s what it’s supposed to do in theory, but does it really work? Here’s my test. 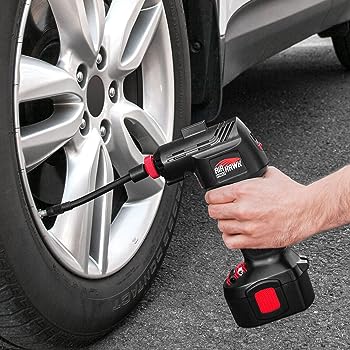 So as you can see this tire is very flat. I’m gonna try to inflate it up to about 32 psi, and we’ll see how well the Air Hawk does with that. It shows 8 psi which is about what my other tire gauge shows. I put it at 32 pounds. I pushed the button. The gauge was accurate. I pushed the button, and it seems to be going on its own. It’s supposed to stop at 32 psi. Well that was only about six minutes or so. That’s not too bad. It didn’t shut off automatically at 32. I don’t know why it didn’t. I hit the button and it hut off, but I’m gonna double-check the measurement with the other tire gauge and see if it actually is at 32. It’s quite a ways over 32. It’s at 38. So maybe the gauge isn’t that accurate but it filled it up quickly. Didn’t stop on its own. I can forgive the gauge being a little off because it performed pretty well. I’m happy with how easy it was to use, except for the fact that it didn’t shut off at 32 pounds. The Air Hawk instructions state that you should probably use a separate gauge to make sure you have accurate results. I agree with that because the gauge in my tests on the Air Hawk Pro was off.
Also read about Best tire inflator

Alright next up I got this old basketball. It’s pretty flat right now. Showing zero. Not really showing any air pressure but it feels like it’s almost full already. Well the gauge was not accurate but it filled it up very quickly so I’m actually… Again I can forgive the gauge if it works that efficiently.

The instructions state that the battery should last about 15 minutes on one charge. Because the first one inflated so quickly I’m going to try doing a second tire and see if I can get two tires inflated on one charge. I got this one down about 15 pounds. Let’s first see if the Air Hawk’s gauge is accurate and then see how long it can take to fill it up and if it can do it on the same charge as the first battery. The Air Hawk is showing 12. My gauge showed 15, so I’m probably going to have to check it throughout the process but I just want to see if it can fill a second tire on the same charge. And we’re off. I’m gonna stop it 24 pounds and see what the actual reading is at. Interesting when I took it off and put it back on, now it shows 19.5 when it showed 24 before. I don’t think it lost that much just switching the gauges over so I think the gauge is a little off but we’ll keep going. As with the first tire, it hit the target psi but just kept going, but it didn’t show an increase in pressure so I had to manually put the trigger. Now let me see if the pressure actually did increase even though the gauge wasn’t showing an increase in pressure. I’m showing it just slightly above 30 pounds so it did continue to fill the tire. The reason I set it at 28 instead of 32 is because it overshot last time and I wanted to make sure I didn’t overshoot too much this time.

So once again: Gauge is not accurate but it does a pretty good job of filling the air. It’s filled the second tire on the same charge. That’s actually a pretty good performance if you ask me. So the results of my first two tire tests were that it inflated a tire from 8 to 38 pounds in six and a half minutes. And then from 15 pounds to 30 pounds in about four minutes. Inflated the basketball in a few seconds. One interesting note is that the manual shows that you can get parts and extra batteries at airhawkparts.com, but at this time here’s what I’m seeing at that website. I’m sure it’ll be open at some point but it’s kind of funny they shipped it before the website was ready to go.

This is going to be my first test. If you have any suggestions about how I can test it in future reviews please leave me a comment and tell me what you think I should do. If you liked this review, I’d appreciate a subscribe so I can continue to bring you As Seen on TV product reviews in the future. Until next time.
Thank you.